At today’s close, the S&P 500 is down 29% from the February 19 highs. This is the sixteenth “bear market” in the modern era—defined as a decline of 20% or more from a previous market high, on a closing basis. What makes this instance particularly challenging is the unprecedented speed; it took just 16 days to go from an all-time high to a decline greater than 20%, the fastest bear market in history. 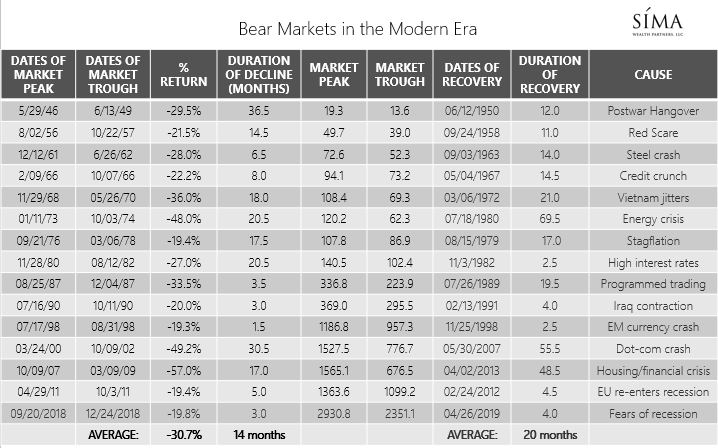 To effectively deal with bear markets, it’s important that we separate the facts of bear markets from the feelings associated with them. To do that, we must look to history. How many of these declines have there been in the modern era, post-World War II, and what did they look like?

Two items of note from the data above: I included four instances that weren’t technically bear markets as traditionally defined, but certainly felt so in the moment. I also did not include dividends—just price levels—as dividends tend to soften and shorten bear markets. The advantage of this method is that it’s the way most people experience the declines in real time—red in tooth and claw, as they say.

So we see fifteen bear markets (as I’ve defined them) in the seventy-five years or so since the end of World War II—an average of about one every five years. The average bear market took just over a year to go from peak to trough and carried the S&P 500 down a little less than a third. Aside from the record speed of today’s crisis, that’s about where we are at current price levels.

On average, recoveries take just under two years. But averages can be misleading. You may notice in the chart that some recoveries are very fast—just a few months. Others drag on for years. Historically, the longest recoveries follow the periods of greatest speculative excess, such as the Go-Go Years of the 1960’s when conglomerates and the “Nifty Fifty” growth stocks were the mania du jour, or the still unrivaled Dot Com boom of the late 90’s. After both of those generational bull markets, stocks went nowhere for a decade. This is not one of those moments, which is why I suspect that the recovery will be faster than average.

Those are the dry facts. But they miss the important point:

No bear market feels average or normal while you’re going through it. They all feel like the end of the world.

That’s because each instance feels new and uniquely different in its effects. The individual circumstances in each case are just different enough to make us wonder if the long-term trends of economic progress and of the growth of earnings and dividends, have been permanently shattered—or simply that they will not be restored to any kind of equilibrium over our personal investing time horizons.

And indeed, each bear market has been brought on by serious economic, financial, geopolitical, and now biological problems which had no exact precedents and were therefore very difficult—if not impossible—to analyze at the time.

Where investors get into trouble is by allowing the new and novel to cut them off from history, thereby losing any perspective and frame of reference that would otherwise be available to them. This leaves them trapped in an illusion of terminal uniqueness—a difficult place from which to make good long-term financial decisions. But by looking at the table above, you’ll see that the equity market has powered through several lifetimes’ worth of worries, transferring wealth from the impatient to the patient. Why should this time be different?

The 2008–2009 subprime mortgage crisis and the global financial meltdown. The 2000 – 2002 bear market: Enron, the accounting scandals, 9/11, recession, looming war in Iraq. 1998: Russia’s default, the domino collapse of the Asian emerging markets, the implosion of Long-Term Capital Management, the world’s largest hedge fund. 1990 – 1991: recession, war in the Gulf, the liquidation of the entire savings and loan system in a real estate debacle that threatened all the banks. 1987: the largest one-day decline in the American equity market, before or since. 1980 – 82: Twenty percent interest rates, ten percent unemployment, twelve percent inflation: the horror of stagflation. All unique. All different. All resolved.

All with one critically important thing in common: when we were going through them, it was impossible to say how they’d get solved. But in time they all did. You didn’t have to know how, and indeed nobody knew. You just had to maintain your faith—based on the historical record of previous crises—that they would get solved. Things may get worse before they get better, but they will get better.

In the meantime, as restaurants, shops, airlines and factories shut down around the world, a global recession seems unavoidable. The questions now are these: how much of the slowdown has already been priced in (or how much future pain has already been pulled forward into today’s prices), and how quickly will we get through this? Going into this crisis, the U.S. economy was on good footing; housing was going from strength to strength, unemployment was holding steady at generational lows, and household finances were in the best shape in decades. While economic data for the next three to six months will be far off recent trends, once this crisis is over, pent-up demand will come roaring back.

Two final things to remember about panicked markets: in hindsight, they always go too far, and they rebound well before the real economy. Market moves are not primarily a function of good vs. bad news, but rather bad vs. less bad. By the time the headlines start improving, the markets will already be well on their way to recovering.

As your wealth advisory team, we want you to know that we’re rebalancing accounts, harvesting tax losses where possible, and staying committed to your investment plan. If you have questions or concerns, please reach out to us.

SIMA Wealth Partners is registered as an investment adviser and only conducts business in states where it is properly registered or is excluded from registration requirements. Registration is not an endorsement of the firm by securities regulators and does not mean the adviser has achieved a specific level of skill or ability.

Information presented is believed to be current. It should not be viewed as personalized investment advice or as an offer to buy or sell any of the securities discussed. All expressions of opinion reflect the judgment of the authors on the date of publication of this post and may change in response to market conditions.

Content of this post should not be viewed as legal or tax advice. You should always consult an attorney or tax professional regarding your specific legal or tax situation.

All investments and strategies have the potential for profit or loss. Different types of investments involve higher and lower levels of risk. There is no guarantee that a specific investment or strategy will be suitable or profitable for an investor’s portfolio. There are no assurances that an investor’s portfolio will match or exceed any particular benchmark. You should consult with a professional advisor before implementing any strategies discussed.