Skip to content
Reflections on the 10-Year Anniversary of the Current Bull Market from Ashley Vice, CFA, CFP®

Last month, the bull market that began in 2009 turned 10 years old and the current economic expansion is about to become the longest in our country’s history. Just last week, the NASDAQ and S&P 500 indices fully recovered from their December lows to hit new all-time highs, with the Dow Jones Industrial Average close behind. Rather than high-fiving each other in the streets, investors are mostly wringing their hands with worry about an impending recession and ensuing bear market.

Fears of a market crash have been endemic throughout this bull market, which has caused investors, individual and institutional alike, to underweight equities, leaving a lot of money on the table. The financial crisis hit hard on all sides, causing a once-in-a-generation reset of how investors perceive risk and volatility. The most popular opinions to emerge from the crisis seem to be that the whole system is rigged or that the other shoe is about to drop.

This is similar to what happened after the Great Depression. That shock was so severe that it induced a high degree of financial conservatism and a deep skepticism that lasted well into the late 1950’s. While economic and market conditions change, human psychology is remarkably consistent in how it reacts to stress and loss.

This post-crisis desire for safety has produced a gap between perceived risk and actual risk. In equilibrium, the two are the same. But that’s not been the case. Instead, the desire to avoid risk has been so strong and persistent that it has caused assets that are perceived as risky to be undervalued, and assets that are deemed safe to be overvalued.

For example, the implied equity risk premium—the extra return above Treasurys that investors require in order to take the risk of owning stocks—has been elevated throughout this entire cycle. Historically, when bull markets reach their apex, the equity risk premium is low, as it was in 1999 and at the end of the 1960’s bull market. But when the premium spikes, investors are usually rewarded with above-average returns going forward, as they were in 1980 and 2009. 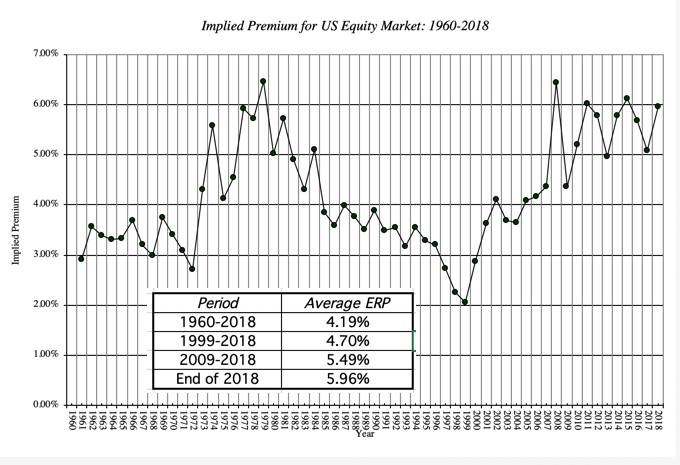 At the start of this year, the equity risk premium was about as high as it’s ever been[1]. And I’ll repeat: it has been higher than normal for a decade now. This tells me that investors have not abandoned their post-crisis need for safety. They’re still fearful of owning stocks despite healthy corporate fundamentals and a strong economy. How else can one explain the fact that since 2009, investors have added a paltry $241 billion to US equity mutual funds and ETFs while adding $2.13 trillion to bond funds? I wouldn’t make investment policy out of just two metrics, but it’s generally good news for stocks, as no bull market in history has ever ended amid such high levels of risk aversion.

Another misstep that has harmed investors over the last decade has been the attempt to forecast the near-term movements of the US and global economy, and to adjust portfolios accordingly, presumably avoid being aggressive going into the next recession. Despite the fact that great minds like Warren Buffet and Peter Lynch call economic forecasting a fool’s errand, much of the financial “news” is squarely focused on macroeconomic data. But the economy and the market are not nearly as correlated in the near-term as most people assume.

My favorite analogy to explain how the economy and stock market play off of each other comes from fund manager Ralph Wagner. Imagine an excitable dog is on a very long leash in New York City, darting randomly in every direction. He chases squirrels and strains against his leash. He runs left. He runs right. The dog’s owner is walking from Columbus Circle through Central Park to the Metropolitan Museum. He walks fairly straight with very few deviations. But at any one moment, there is no predicting which way the dog will lurch. In the long run, however, you know that both are heading northeast at an average speed of three miles per hour.

In this analogy, the dog is the stock market and the owner is the economy. They generally walk on the same long-term trend line, but their levels of deviation are very different. The chart below is a visual of what I mean. 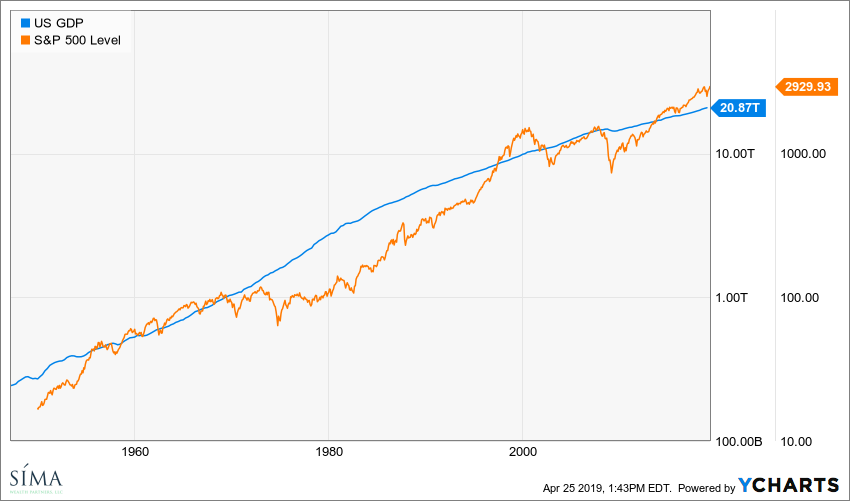 We had the euro crisis of 2011, the Taper Tantrum of 2013, recession fears in early 2016, and a period of global angst in late 2018. Stocks sold off in each case because of macroeconomic fears, all of which proved to be false. Case in point: in January of this year, the Atlanta Fed forecast GDP growth in the first quarter to be 0.3%. Financial commentators pounced on the bad news as justification for reduced stock exposure. But that GDP figure was just revised to 3.2%, an increase from last year. As Peter Lynch said, more money is lost worrying about or preparing for a recession than is lost in an actual recession.

So where are we now? The economy is still growing. The Fed is in no hurry to raise rates further. Inflation is low. Bonds aren’t offering significant competition to stocks. Dividends for the S&P 500 grew at nearly 10% over the last year. There is plenty of room for dividends to grow even more since the current payout ratio is below average. Buybacks are at record levels.

In general, things look good. So it makes sense that stock prices are at all-time highs. It’s not a Potemkin village. It’s not Fed manipulation. It’s not a house of cards. It’s thousands of publicly-traded businesses improving their products and services, competing, growing their markets, and finding ways to be more profitable in an environment that is currently quite favorable.

Investment advisory services are offered through SIMA Wealth Partners, LLC and SIMA Retirement Solutions, LLC. The firms are registered as investment advisers and only conduct business in states where they are properly registered or are excluded from registration requirements. Registration is not an endorsement of the firms by securities regulators and does not mean the investment advisers have achieved a specific level of skill or ability.

All opinions represent the judgment of the author on the date of the post and are subject to change.