Posted by SIMA
in Retirement, Wealth

Here’s what 2020 has thrown at us so far: a global pandemic, economic depression, tens of millions unemployed, zero-percent interest rates, unprecedented monetary and fiscal stimulus, an explosion in the debt and deficit, and social unrest in the form of riots and protests.

And there’s a presidential election in four months.

Meanwhile the S&P 500 is essentially flat for the year. The question I get most often is “how can the markets be this strong with all that’s going on? It seems disconnected from reality.”

I understand the sentiment but there’s good reason for the resilience. Widely-followed indices like the S&P 500, the Dow, and the Nasdaq are market cap-weighted, so the largest companies comprise the bulk of the index. When they go higher, they pull the rest of the index along. And fortunately for most investors, the indexes have become dominated by the stocks most likely to survive (and thrive!) in a pandemic. Consider that just five large tech companies now comprise nearly 25% of the S&P 500. As goes Apple, Amazon, Microsoft, Google and Facebook, so goes the market.

This chart from Morgan Stanley is stunning: 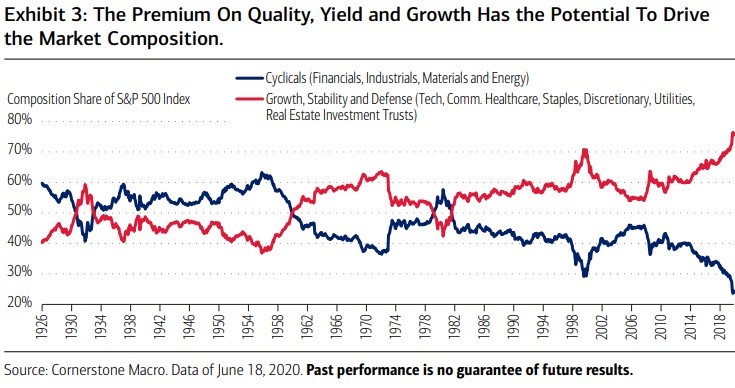 The market is now dominated by growth, stability, and defensive stocks. Meanwhile cyclicals now have their lowest weighting on record. So the underperformance of cyclicals gets less relevant to the performance of the S&P 500 with every day of shrinking representation. It’s a force that feeds upon itself.

With the markets being dominated by big tech, it’s no wonder why we’ve seen such resilience in the major indexes. With everyone home for months on end, what have we been doing? Shopping on Amazon. Using Microsoft, Google and Apple products to work remotely. Streaming untold hours of Netflix and Disney+. The stock prices of companies like Zoom, Docusign, and Shopify have been flying. The virtual economy is on fire. (in a good way)

But it’s not just big tech. Throughout this crisis, the largest companies have benefited at the expense of the smallest. Large retailers like Wal-Mart, Target and Home Depot have increased their market share. National fast food companies and large grocery chains have held up well compared to local restaurants and shops. Trends that were playing out over years have been sped up and amplified.

So yes, the markets seem to be doing a good job of looking across the valley of despair; let’s just be clear about the vantage point.

Still, a lot of the global economy is down in the valley, and there may be opportunities there.

Just as the COVID winners (mostly tech) have gotten very expensive, the COVID losers are equally cheap. And coming out of a recession, cyclical stocks and beaten-down names tend to lead, sometimes by a very wide margin.

But we’re not there yet. At this point there’s still a lot of weakness in cyclical stocks and no sign of a sustained turnaround. Banks are weak. Retail is weak. Value is weak. Small cap is weak. It looked like cyclical stocks were starting to recover in late May, but as the number of new COVID cases started to increase in mid-June, they rolled over and are back in the doldrums. Lots of things that looked really cheap at the start of the year and throughout this crisis have gotten much cheaper. It’s just unfortunate that valuation has historically been such an unreliable timing tool.

Switching our focus to bonds; it has been a great year for long-dated Treasury bonds. High-quality bonds in general have had a great year. But what can we expect going forward? At these yields, bonds are not offering much compared to stocks. The 10-year Treasury rate is below 0.70%. And that’s before taxes and inflation. In contrast, the dividend yield of the S&P 500 stands at 1.93%. (Which would you rather own over the next 10 years?)

This pandemic has really compressed the timelines of most everything. E-commerce, work-from-home, telemedicine, etc. And it definitely sped up the credit cycle. The sell-off in March gave bond investors a brief chance to pick up some incremental yield, but the Fed stepped in so quickly and forcefully that if investors blinked, they missed it. We saw the entire credit cycle (in which yields go from low to high and back to low) happen in weeks, not years. As I write this, investment-grade corporate bond yields are at record lows.

Going forward, the most obvious headwind is a second wave of COVID infections. Already we’re seeing rising infections in the southern and western states, with more than half of the country pausing or walking back their re-openings. We need better compliance for things like face masks and social distancing.

Another risk is policy fatigue. Democrats and Republicans came together quickly in the first quarter to pass massive stimulus, but partisanship is back. There’s talk of a new $1 trillion stimulus package from the Trump administration, but no details. We will need more stimulus. No one doubts that. But will we get it, and what will it look like?

Finally, there’s the election. Biden is ahead in the polls but nothing is certain. To the extent that Biden is seen to be the winner over the next few months, I expect the markets to price in the effects of his tax plan; namely, higher corporate tax rates and a drag on GDP growth estimated at 1.5%. In any case, I believe we’ll see heightened volatility at least through the election, at which time we should be very close to a COVID vaccine.

Aside from rebalancing, tax-loss harvesting, and investing new cash, we put on a new position in “fallen angels”—bonds that were originally issued as investment grade but have fallen to high-yield status. Our thesis is that the yield is attractive relative to the risks, especially since the Fed will be supporting this segment for some time to come. They said they’ll stop buying corporate bonds at the end of September, but I doubt it. They could be doing it for years. Any brushfires that flare up in the credit market will be met with a “whatever-it-takes” response. The European Central Bank has been supporting their credit market for years and their junk bond yields eventually went negative.

We’re also looking closely for signs of sustained economic recovery. This could come in the form of higher Treasury rates (very unlikely in the near-term) or an improvement in any number of economic indicators like the unemployment rate and consumer confidence, or even an uptick in inflation. Some combination of these things has usually been present at previous turning points. Investing is the act of making probabilistic decisions with limited data about an inherently unknowable future. In other words, it’s difficult and filled with uncertainty. But should more green shoots emerge (and not wither), we’ll look to add cyclical positions that take advantage of an economic recovery.

I hope you’re all well and staying safe. If you have questions or comments, please let us hear from you.